In my lifetime, I’ve encountered many parlors—living room, beauty, and funeral, but until last year the “tattoo” variety of the species had eluded me.  When my friend, Elise informed me of her plans to get a tattoo to celebrate turning forty, I had no choice but to oblige. After all, who was holding my hand when I thought I’d might collapse during my visit into the world of risqué – the toe ring department of the Piercing Pagoda? Elise.

“What are you going to get?” I asked.

“A small, quaint seahorse,” she replied in her school teacher voice.

We should have realized there was no such thing at a place called Big Art’s.

The following Saturday we arrived at Big Arthur’s Tattoo Parlor and parked her minivan out front amongst a flotilla of Harley’s and pick-ups.

“I feel like a Hare Krishna at a quilting bee,” I laughed emerging from the van dressed in my florescent sundress and matching feather purse as the other Hell’s Angel types sauntered in.

“You’re liable to get us killed in that get-up,” Elise giggled nervously. “You’re a dead ringer for Big Bird.”

“Yeah, visiting the Bates Motel,” I said standing on the porch of the ominous house with its peeling paint, blackout curtains, and winged, ceramic gargoyles– somebody’s idea of a welcoming committee.

I’m not sure what I expected inside, but bordello-red walls trimmed out in black fur, stained glass lamps, and two, zebra-print upholstered barber chairs wasn’t exactly it.  The neon sign above the bathroom flashing—“No whining. No flinching. No refunds, No Kidding,” was a harbinger of things to come. They should have added—“No fainting.”

We both let out a terrified “gasp” when the artist in residence, Big Art lumbered from the back and moved towards us. I stood slack jawed while he removed his black leather jacket embroidered with “Ass Kickers” in big orange letters across the back, revealing a whiskey barrel chest and a set of heavily tattooed arms. Hmm. I don’t suppose the Ass Kickers are affiliated with any religious groups.

“What’s your story, Blondie?” he barked at me while an ashen Elise lie horizontal in the furry barber chair, clutching her rosary for what I was convinced would somehow result in her early demise.

Initially I was at a loss for words– swallowing an entire piece of Laffy Taffy will do that to a person, but I finally uttered, “Uh, me? I have no story.” A lie of course. But things were about to change when he donned a pair of red, drugstore cheaters identical to mine. Yep. Scary, ass-kickin’ Arthur suddenly became my far-sighted teddy bear with the exception of the brass knuckles protruding from his back pocket.

“So are you going to get one?” Elise baited me. “Art, ever do a possum tattoo?” she asked, as she volunteered my “unusual” connection to this tree-hanging varmint. The look across his hardcore, “Streets of Brooklyn” face told me he hadn’t.

It’s not every day one runs across a Possum Queen.

“I’m sure we have a possum here someplace,” Art’s determined assistant Spike proclaimed, digging through their animal inventory.

I was relieved when lo and behold, there wasn’t one possum to be had.

Naturally what I hadn’t counted on was Spike’s lightning-speed with a pen and ink. He emerged from the backroom producing a possum in twenty minutes flat—dangling curly tail and tiara to boot.

It needs something,” he mused, before adding the front-end bumper of pick-up.

“We’ll see,” I said, sliding my “marsupial” masterpiece into my feathery purse.

Meanwhile, poor Elise was changing color as quickly as that rainbow seahorse Art was etching into her calf.

“You don’t look so well,” I said, as her face turned a peculiar shade of gonad green, then purple, and then gastropod-gray.

“It really hurts,” she whispered, as I waited for her to either pass out cold, scream, or croak.

When the Lamaze breathing exercises and emergency sock puppet I’d brought failed, I knew there was only one solution. Beer. I quickly ducked next door to Juan’s Groceria to grab a couple of brews or in this case— cervezas (Spanish for beers). Apparently drinking is the one “NO” not frowned upon in the parlor.

Entering Juan’s was an adventure in itself, like staring in a foreign film without the luxury of subtitles. Store shelves brimming with oodles of unfamiliar products, and a small desk in the back where you could, if my rusty college Spanish served me right, have both your taxes done and your palm read simultaneously with the renowned, Senorita Sonya. My head was spinning. Too bad for me that Juan didn’t have the foresight to add “el translator,” to his inventory.

Like a flamingo out of water, make that a “gringo,” I scanned the store for Elise’s favorite beer. Well, any beer with a label written in English would’ve been welcome. When she let out a piercing yell from next door I threw caution to the wind and grabbed four bottles of that ever-popular brew sweeping the country–La Famosa.

It’s amazing how a bad situation can improve vastly with the addition of a favorite libation. You know the old cliché, “Just add a La Famosa and a smile,” well, it certainly did the trick. Elise hardly noticed as Art engraved for another hour and I snapped souvenir photos in between her hiccups. She didn’t even flinch when he slapped the foot-long bandage over her seahorse. Hell, you could saddle it. So much for dainty and quaint.

“It’s truly beautiful, Art,” I said, before loading a tipsy Elise into the van.

As for me, I’m not sure if getting tattoo will ever make it onto my bucket list—but if I ever choose to walk on the wild side again, I’m ready. I’ve got a possum in my pocketbook—and  La Famosa in my fridge. 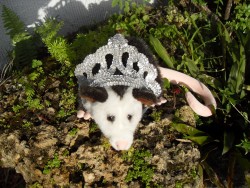 Once Twice Three Times A “Fraidy”

“Ma’am, what brings you here tonight?” the E.R. doctor asked Mama who was stretched across the gurney giggling while I nervously paced, as if she’d expire at any moment. “Looks like you overdid it on the dance floor,” he chuckled.

Yeah, while boogying to the Rubber Radial Rumba.

Before Mama answered, I pointed to her swollen foot, her blackened toes resembling grotesque piano keys. “I don’t know how it happened, but I did it! I shrieked. “I ran over her! My own Mama! Not once, but three times!” I blurted, throwing myself on the mercy of the medical circuit while clutching the blue, leather, tell-all evidence. You know that old cliché, “from tragedy comes comedy– and a squashed ballet flat.”

“Three times, huh? Was it on purpose?” the comedic physician howled surveying my damage.

The nurses exploded with laughter as did Mama, obviously delusional with pain. As for me I kept singing the Christmas tune, “Grandma Got Run Over By a Reindeer.” Must have been the shock, after all it was my first “official” maiming. Poor Mama. She was already walking crooked due to her bad back and now look at her. Her foot resembled a lopsided eggplant. Heck, I’m supposed to be mindful of her deteriorating health, not a contributor to it. Hmm. Wonder if my AAA card will be revoked or if I’ll be charged with assault with a deadly Michelin?

“Don’t you worry, this was bound to happen with all that you’ve had going on,” Mama consoled, as the nurse slapped an ice pack atop Mama’s foot while Grandma and her homicidal reindeer still echoed in my head.

Recently my house had been more hectic than usual. My son, Jack just finished a 12- year journey to becoming an Eagle Scout– an endeavor that required everyone channel their “Inner Chippewa.” Some days rivaled the infamous table scene in the Helen Keller movie as he struggled to finish. You’ve never seen such fits: crying jags, writhing on the floor, broken dishes, and the desecration of one perfectly good pot roast. Jack’s behavior was almost as bad. To top it off, in addition to hosting a houseful of company for the weekend, I’d taken on the repurposing of several, antiquated scout badge replicas that had seen their share of mildew and wood weevils. (Yes, a scout’s Mama is brave, trustworthy, and stupid). After ten days they were only halfway completed, just like the dining room floor that Hubby was frantically laying around me.

“As long as nobody walks on this side of the room, they’ll never notice that big hole I made,” he assured, as I prayed for a miracle and inhaled more paint fumes. When Mama and Daddy arrived early to help out they found me neck-deep in Clorox, cookbooks, and antispasmodics. Why is it when you’re expecting guests your body always goes into involuntary spasms? I half expected Elvis to drop in and croon, “A Whole Lotta Shakin’ Goin’ On” as I popped muscle relaxers like Skittles.

“Don’t worry the Calvary is here,” Mama proclaimed. For the next three days she worked tirelessly from dawn to dusk cooking, cleaning, sewing, shopping, gluing, and glittering. And as a dutiful daughter I showed my appreciation in a way that would last long after she’d returned home. Five indications that you’ve run over your Mama–

“What’s wrong with butthole, everybody’s got one,” said Big Don my latest dream date with a look of total surprise on his face.
I watched in horror as Mama spewed her wine across her fancy linen tablecloth, and Daddy nearly choked on the Sunday ham. It was the first and last time that word was spoken at our table.